Articles in the April 22nd issue of Air Force Times entitled "Attack on pay and retirement: COLA change would cost careerists thousands" and "2014 budget calls for smaller raises, higher fees" detailed plans on attacking active-duty, retiree, and disabled-Vet incomes. Once again, our fearless leaders, President Obama and the geniuses over at the Pentagon, are going to rob Peter to pay Paul and Peter is us ... MILITARY AND VETERANS WHO RISK(ED) OUR LIVES FOR.OUR COUNTRY.

I am sick and tired of losing the ENTITLEMENTS I was promised when I signed on the dotted line TO SERVE MY COUNTRY FOR 20 YEARS!

Obama wants to cut retiree and disabled-Vet cost-of-living increases by 0.3% annually, resulting in a $250,000 plus deficit over an officer's lifetime.

Then there is the Pentagon. Our fearless leaders, and I use that term sparingly, want to increase TRICARE enrollment fees because TRICARE "one of the lowest-cost healthcare plans in the nation" has lagged behind other plans in enrollment increases. Wait a minute ... "healthcare plan"? TRICARE is not a healthcare plan, it is an "entitlement" regulated by Congress for those willing to put our lives on-hold and on the line TO SERVE OUR NATION!

We (retirees) make LIFE DECISIONS based on our projected income ... LIFE DECISIONS ... then these politicians and military puppets decide to play games with that income rather than tighten belts and cut the mass amounts of fat in the military budget? A 40 inch waste is nothing compared to the $40 MILLION+ in pet projects, end of year spend-down frenzies, Thunderbird and demonstration team budgets, bands (e.g. Tops in Blue), and other huge wastes of taxpayer's payments.

Healthcare plan! I do not remember getting to come home to my family EVERY NIGHT for over 20 years. I do remember several promises my recruiter made to me prior to enlistment, promises that have been broken time after time after time after time. Integrity is a core value of all services, maybe Obama and the Pentagon should grow some ... INTEGRITY THAT IS! 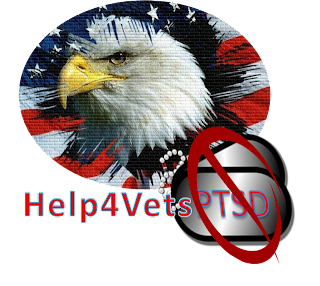 On the front lines in the battle against PTSD

Help4VetsPTSD
We provide pro bono publico (FREE - from the Latin "for the public good") services to 10% of our clients at any given time. Help4VetsPTSD will help low-income veterans with PTSD and other combat-related problems get the help they need at no-cost. We are currently seeking non-profit status and plan on starting an intensive live-in program where veterans can focus solely on getting better with the support of professionals and veterans just like themselves. If you or someone you know is interested in helping us attain our goal, financially or through the gift of time, please contact our executive director today. We need: - A Board of Directors with experience in: - Law - Accounting - Non-Profit Management - IT (Systems and Internet) - Marketing - Volunteer Counselors